Analog in a Digital World

By Sara Bliss, excerpt from TAKE THE LEAP: Change Your Career, Change Your Life (buy it here)

It was his father’s total disinterest in fashion that sparked Ge Wang’s interest in clothing. “My Dad was a lawyer but he would go to work in an ill-fitting suit. He never really dressed the part,” explains Ge. “So starting in law school, I kind of made it my mission to dress up.”

Despite Ge’s efforts to look sharp while clocking in as a real estate lawyer in Chicago, he wasn’t impressed with what was available, even when he splurged on a custom suit from a top local tailor. “I was pretty in shape and I thought, why don’t I look like these guys in magazines?” Ge jokes. So on his next trip to visit relatives in Beijing, a city that boasts some of the world’s top tailors, Ge had a suit made . Not only did the young lawyer notice the difference, his friends did, too—and they wanted their own. Knowing he had could offer his friends a better fitting suit at a lower price than what was available in Chicago, an idea for a side business was born. Ge sold 30 suits his first year, all while clocking in at his day job.

Ge admits he mistakingly thought the job would be fairly simple. He figured he just had to learn how to measure, get some sample fabrics, and work with a tailor overseas. He was wrong. “I thought there wasn’t much to it, especially the measuring but that alone is super in depth! A lot of it is human anatomy, understanding how the body works.”

Business grew quickly simply by word of mouth, and after two years of working from his apartment, he had to make some decisions. “I was half-assing both things and I had to choose one or the other. I really liked this new gig a lot more, so I made the choice to leave law,” says Ge who launched ESQ Clothing in 2012. “Five years ago if you told me I would running a clothing business, I would have told you that you were crazy.”

With the decision to launch the business full time, Ge aimed even higher, making sure he was standing out from the pack of custom suit makers in Chicago. For Ge that meant offering clients truly bespoke, handmade clothes. “Most “custom” suits are actually machine-made using Asian fabrics,” he explains about the big brands who use computer imaging scanners. Ge claims the products don’t live up to the hype. “It’s basically airport scanner technology that is repurposed. Unless you are model sized, it doesn’t work,” he explains. “We are the opposite. While the world goes more digital, we are going to do it analog, we’re going to do it the classical way, the right way.” Ge did apprenticeships with a variety of tailors to learn about the art of measuring. Today his appointments last an hour, vs. the standard 10 to 20 minutes, and he takes 34 measurements while most made to measure suits will measure 12 to 18 spots.

Ge devoted himself to learning everything about the craft of high end men’s clothes. He visited over 230 factories and tailors around the world to understand how to make the best suit. Ge also visited high-end fabric mills in Italy and England. “I really didn’t understand the difference in fabric—what is good, better, best…how one fabric vs. another is going work with different body types.”

Ge’s business is been 75% from word of mouth. While corporate types and wedding parties do make up a big part of his business, he has garnered a lot of attention thanks to a steady clientele of Chicago’s top athletes and performers who love the unique cuts, colors, and fits and share the looks on social media. Chance the Rapper, the members of Fall Out Boy and football stars Marcus Mariota and Mitch Trubisky all own ESQ originals.

Ge believes that noticing what’s missing in the market is a smart way to launch a business idea . However, he says being an entrepreneur isn’t something that can really be taught, “You have to be a little crazy,” he admits. “You just have to believe in your idea, jump off a cliff, and do it.”

DIRECTIONS
Main entrance between Starbucks and Jimmy John’s.
For deliveries, please contact us. 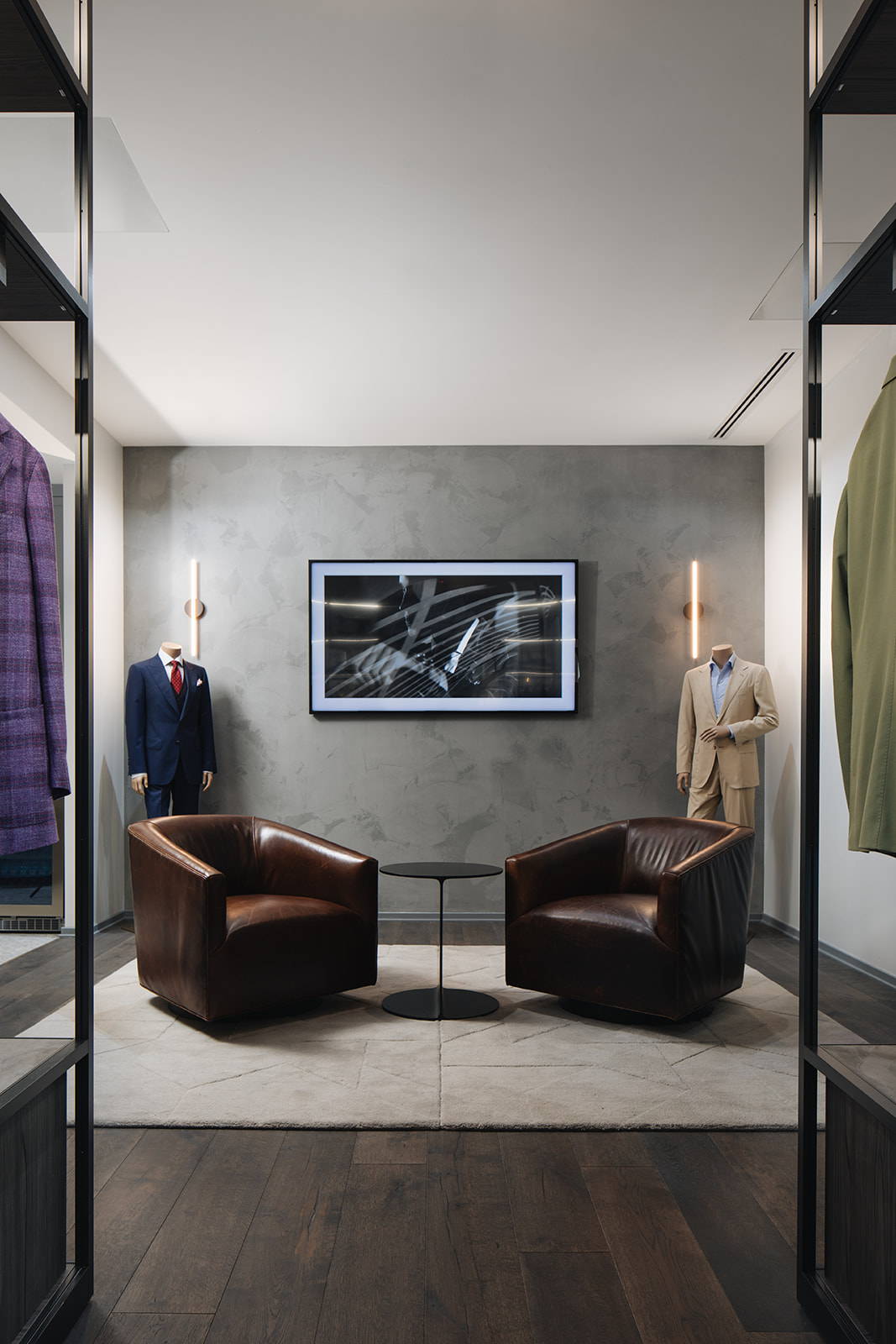