WEST LOOP —As the NFL draft rolls into town this month, a West Loop tailor will be dressing some of the draft's hottest picks.

ESQ Clothing in the West Loop will be dressing several top draft picks on their big day, owner Ge Wang confirmed this week.

Offensive tackle Ronnie Stanley and linebacker Jaylon Smith  — both Notre Dame stars — are slated to wear the custom clothier's designs when they attend the draft later this month. Stanley is widely expected to be selected in the first round of the upcoming draft, likely somewhere in the top 10 picks. After suffering two torn ligaments in his knee in the Fiesta Bowl, Smith's draft status is unclear, but an ESPN analyst said this week that the top talent could be a NFL superstar for years.

Reporter Stephanie Lulay on the awards show style at the NFL draft.

"I've actually known these guys since they were freshmen at Notre Dame," said Wang, who has designed suits for a number of former Notre Dame players and has an impressive roster of NFL clients.

It was only natural that Stanley and Smith would be wearing ESQ Clothing on the biggest day of their lives to date.

"For so many of professional athletes, the draft is the most important day in their lives up to that point. When they look back in 10 to 20 years, I want them to know they looked their best," Wang said. "It's great media exposure, not only for us but also them as they start to build their brand. We're grateful to be a part of such a special day."

Both draft standouts will be wearing custom suits lined with a screenprint of their image on silk and other unique touches.

"We design these from scratch and create a piece of art for the players," Wang said. "Ronnie's from Vegas — he's a huge Vegas guy — so we thought it would appropriate to incorporate Vegas in the design."

The NFL draft will take over Grant Park April 28-30. 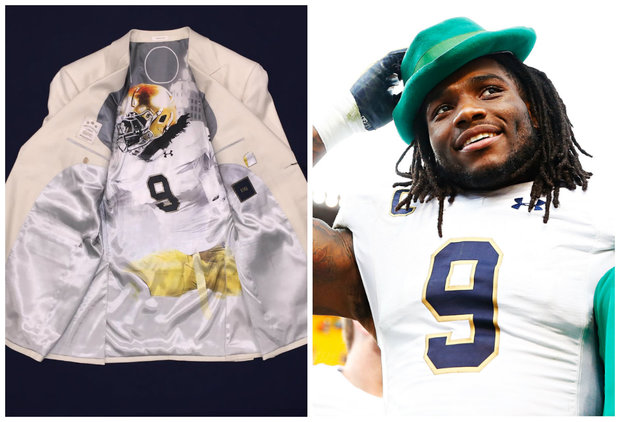 You can use this element to add a quote, content...